The (almost) Vagabonds of a Generation. [Part 3] 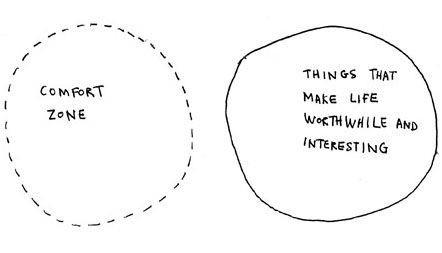 It’s the “rock bottom” attitude that I want to challenge today.

Rock bottom is just an invented place where the weary travelers rest.

There is always further distance to fall. And to definitely greater heights to climb.

As I’ve been talking about in Parts 1 and Parts 2, I believe

in our generation……we err not in our extremes, but in our stunning display of mediocrity. Taking a picnic between solid ground and summit.

Also, consider there actually are two ways to fail:

– From succeeding at things which really don’t matter

Both stem from the “No way! I’m leaving my circle. This-is-all-I’ve-ever-known”  excuse.

It’s the comfort seeker inside of you.

Yes, you know the one. He’s small and green and hungry, like the creature from the Mucinex commercial, but instead lives in the deep in your belly and refuses to eat anything other than sweets.

And because, in America, sugar-infused products are never in short supply, you and he are good friends.

In fact, you have never had a single argument.

all hell will break loose.

Tantrums will ensue the painful aftershocks.

You will be at war with yourself. This thing inside of you. It affects everything. Like a how a toothpick under the fingernail racks the whole body with electric shocks.

How could something so insignificant take over my life?  When did I lose control and start letting circumstances dictate my happiness?

We live in, not only a nation, but within an era, where possessions are the highest form of aspiration–the greatest measure of “success”.

I’m not even going to waste my time making an argument about this.

If I could go even 1 day without seeing a car, which cost more than a house anywhere else in the world, I might take give a double take. For a brief second.

So, moving on with my point,

Even if you want to, it’s extremely difficult to get rid of this perspective.  We were born into it.

Sorry. Had to get that one in.

I like that word because “millennial” subculture has re-manned it for comedic use. When some yells, “Murica!” after someone’s statement, we take a second look. We laugh. It has helped us see the extremes of our nation and poke a little bit of fun at some things which needed poking. (Or a straight slap in the face by a bald eagle). And as it’s done with humor, we’re starting to be able to laugh at ourselves, which is awesome.

I think it’s really hard to be aware of why we do the things we do, on a daily basis. Half the time we fall into error due to good, ol’ fashioned ignorance. On auto-pilot. It’s not purposeful. But that doesn’t really help the outcome. Also, it never hurts to have a sense of humor. When you begin to take yourself too seriously, people become objects and opposition, instead of the main focus.

So what is the “main focus”?

God, how do I say this to you without sounding…trite?

If you were broke – and I mean dead broke, on the street- could you still be happy?

That’s what I aim to find out.

The reality of the answer for most of us is screaming “no!”. Already. And we haven’t even left out chair! C’mon, be honest with yourself.

That’s what I started asking myself. (among other things) What is the struggle of modern American youth? As I mentioned in Part 2 last week, it’s certainly not physical or material. No, it is “spiritual”. Perhaps not in the sense of religion, but that we are apathetic about creating meaning in our lives. We have given up on searching for our passion. We have given into the norms of society.

Giving up is always easier than embracing the struggle.

So, ask yourself: If you stripped away ev-er-y-thing, all the things you consider “necessities,” could you still find meaning in your life? Would you have the courage to chase after those deeper passions?

I mentioned I was going on a road trip across America. But I didn’t tell you how.

I wasn’t sure you were ready for it.

Most people aren’t when I tell them.

Well, here it is: I’m going on foot. I’m hitchhiking and riding on trains. With only a backpack, a small camera, and notebook.

No safety net. Nothing for someone to be able to argue, “well David you weren’t really homeless.” Or “Well, you didn’t really have it that bad, because you had______” (insert whatever here, like blow up mattress, The Hilton, a car, gas money, 3 square meals, etc).

No promises. No expectations. No guarantees. Strip away all of my comfort zones.

The point of life is not to successfully wall off any possible room which leads to “risk” or “danger”.

THE POINT IS– WE ARE ALREADY TOO COMFORTABLE. We are entertaining ourselves to death.  Who decided comfort was the point, or single hallmark, of a “successful” life anyways?

All this to say: I want you to know, at the lowest of your lows, there is always an option. Believe that.

Sometimes, we just don’t like it. Mostly because it’s never an easy one. You always have an option. We just convince ourselves we can’t afford take it.

But you can’t afford not to. A heart is a precious thing to waste.

Find it and don’t let go; don’t let anything stand in your way. That’s it. Don’t over-complicate it.

Oh come on now. Please don’t make that face at the computer that says “You’re crazy anyways. No way in hell I’d do that!” I’m not saying your journey will look anything like mine. That’s your story to write and everybody’s conflict will be different. I just want to show you that it’s possible.

……Maybe somewhere along these roads we’ll both find hope and reason to believe in the “pursuit of happiness” again.

One thought on “The (almost) Vagabonds of a Generation. [Part 3]”